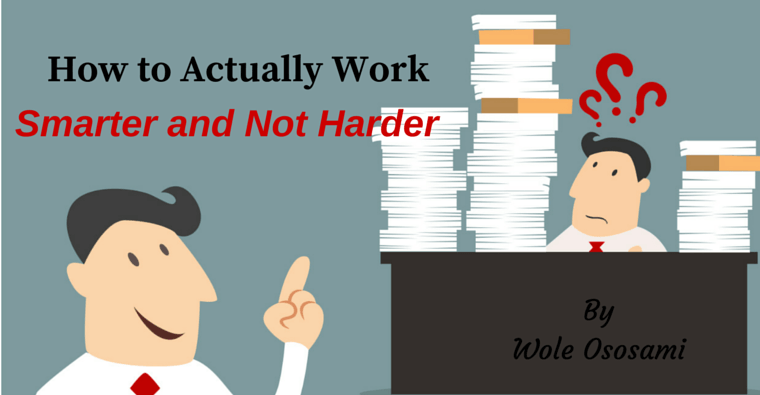 I hesitated to use the title “Work Smarter, Not Harder,” because I know you’ve probably heard it a thousand times, perhaps from a boss who is actually quite content to see you running about in all directions, and who thinks that if he’s not seeing a lot of activity, nothing is really being accomplished.

You’re braver than you believe, and stronger than you seem, and smarter than you think.
~A.A. Milne

If you could add up all the seconds, minutes and even hours you waste in the course of a typical work day, you’d probably be quite properly horrified.

To actually work smarter, you will need to ask yourself some questions about how you do your work?

So here are five questions to answer.

Here’s another scenario: Think about the last time you spoke to someone on the phone. Did you begin with small talk? “Hi, it’s Danny Sponagle from ABC Logistics. How are you?…. Good, good…. Great weather we’re having!…. Yeah, I heard we’re getting a storm, but what can you do? Listen, about your order….” By the time you got to the business at hand, which is the order, you’ve probably wasted a good two minutes. If you make just fifteen phone calls in the run of a day, that’s two and a half hours gone out of any typical workweek, wasted on mindless chatter. We’re not saying you shouldn’t be friendly, but cut to the chase.

If your workplace is inefficiently organized, you could be spending far too much time on what should be simple tasks. If your daily routine requires you to photocopy documents several times a day, for example, having the documents filed in your desk drawer while the photocopier is located down the hall next to the break room makes for a lot of “travel time.” Wouldn’t it be more efficient to move the copier closer to your desk, assuming it doesn’t inconvenience anyone else? Or could you do all your copying at the end of the day? It’s little things like this that really add up to a lot of wasted time.

Pretend you’re lazy. Think about how to achieve what you need to do while moving as little as possible. Perhaps you’ll refine this to the point where you can write a book – The Highly Effective Habits of Really Lazy People.

It’s amazing how many people are afraid to delegate routine tasks. Whether it’s fear of losing control, or just not accepting that there are other people who could do the job, a lot of valuable time is wasted by CEOs and managers who devote themselves to much to details. Let someone else organize the paper clips, if they must be organized. You can bet that someone else in the office can do it just as well as you can, and you’ll free yourself up for more productive tasks. You’ll have more time available, and you’ll be able to focus on tasks that really need your attention.

People need to clear their minds once in a while. If you’re stressed out and overwhelmed, you’re not working at peak efficiency. Take a breather. Get a cup of coffee or a drink of water. Think about something besides work. When you come back to your work, you’ll be refreshed and more productive.

Everyone does it, and hardly anyone is good at it. You might think you’re getting more done by going in all directions at once, but realistically, your work is not likely up to snuff. You’re just wasting time going back to fix what you’ve messed up.

These are just a few thoughts for you to begin to question how you do your work. You just might be surprised about what you achieve by making some adjustments based on your answers.

Question: Are you working harder or smarter?