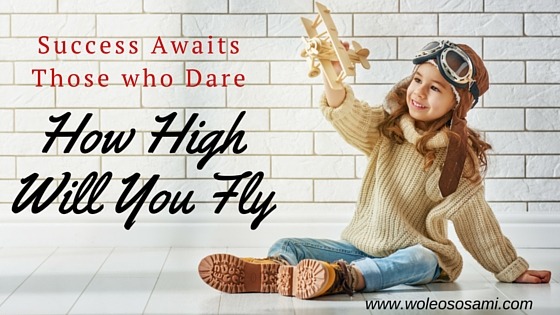 You should have been with me that Sunday afternoon. Standing with my head down and my eyes wide-open waiting for the procession to pass. The trumpeter was blowing “The Trumpet Shall Sound” from Handel’s Messiah. And all that was going on in my mind was “when is this ordeal going to pass, I am hungry”.

After what seems like eternity, I looked up, and the impressive domed ceiling caught my attention. I could not take my eyes off this magnificent dome as the music faded in the background.

From the outside, the Methodist Central Hall is not too different from all the other surrounding buildings. Yet on the inside, the vast scale of this self-supporting structure, the level of detail and the gold-stained finish led me to three conclusions:

Like the successful building of the Methodist Central Hall in Westminster over a hundred years ago (1912), your success in life will demand courage, cost you time and you will need to push through resistance along the way.

In his book The Icarus Deception, best-selling author Seth Godin tells the story found in Greek mythology of the famous architect, inventor and master craftsman Daedalus and his beloved son named Icarus.

Daedalus was imprisoned with his son on the Greek island of Crete for murder. It was during this time in prison that he created a brilliant escape plot for himself and his son.

Using his skill as an inventor, Daedalus crafted artificial wings that were fashioned with feathers and held together with wax.

Before embarking on their escape, Daedalus warned his son Icarus not to fly too close to the sun, as it would melt the wax in his wings. As the journey started, Icarus got entranced by his newfound ability to fly and began to fly close to the sun. The closer he got to the sun, the more the wax holding together his wings softened and melted. The wings began to drop off. Icarus frantically flapped his arms. But with no wings to provide the lift, Icarus tumbled into the sea and died.

Traditionally, this story is told to teach the moral of being obedient to your dad.

Staying in your comfort zone

Icarus was also warned not to fly too close to the sea as it would dampen his wings and make it difficult to fly. The dilemma for Icarus was thus to find a comfortable middle to fly in. In life this is called the comfort zone.

We are conditioned by society, friends and family that it is too dangerous to aim high, to be ambitious or to stand out and be counted. And so we operate in our comfortable middle. Not too low and not too high. We carve out a comfort zone and we settle for low ambition, small dreams and a guarantee to achieve far less than we are capable of.

Reach out beyond your comfort zone

A few days ago, I had a conversation with a young lady who told me she didn’t think she was ever going to have enough money in life to do all the things she wants to do. I had very little to say to that other than what I always say.

You have to be intentional about success. It is not automatic. It has to be desired, planned for and worked towards. You will need to reach out and extend yourself and stretch out of your comfort zone.

Indeed the only thing that is guaranteed in the world we live is death and taxes. We will all die and we will all pay taxes directly or indirectly to the government. But we will not all succeed in our endeavours.

Success awaits those who dare

One part of you wants to reach out to start a new business venture, but another voice tells you that the world’s economic conditions are not right. There is a promotional opportunity at work and you want to reach out and put your self forward, but then a second voice tells you that you do not have the required qualifications. And so you stay on for so long in a job that you hate, a job that is taking you further away from your dream because you find comfort and security where you are?

There are no risk-free options

Life will always present you with what seems like a risk-free option. And you have the choice to remain where you are or push forward towards achieving your dreams. Stepping out of the familiarity and safety of a routine job into the uncharted waters of running your own business can be scary indeed. Accepting the promotion and becoming responsible for leading twenty people as the branch manager can be equally daunting.

How high will you fly?

So take a step out of your comfort zone and reach out for a new level of success. When you do this, you discover new possibilities, you discover new abilities that you never imagined you had and you achieve a new sense of purpose and direction in your life.

Dare to reach out to a new level of success.