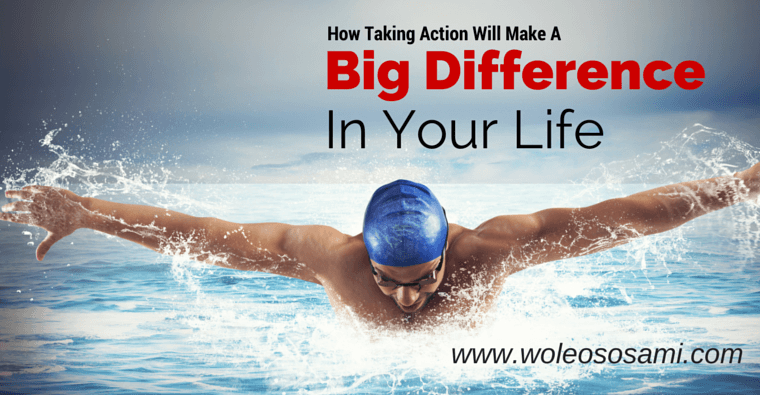 You may have heard it said somewhere that “actions speak louder than words”. This is a phrase I heard while growing up and it has stuck with me for as long as I can remember.

In the last few weeks, we have been talking about reconnecting with your dreams and I have come up with a three step process as follows:

Today is all about taking purposeful action. This is simply your decision to act on your ideas and plans for achieving your dreams. This is assuming that you have a dream.

[shareable]It’s up to you to make it happen. Whatever that ‘it’ is.[/shareable]

I believe that you have the biggest investment in your success. So take action.

The Story of Alan

Alan is employed but hates his job. He knows for certain that he is capable of a lot more than he is doing at the moment. For many years, Alan wished he could start his own business, but he did not have the courage to quit his current job and start. So he remains at his job.

Alan continues to remain a grumpy employee who believes he and not his boss should be leading the department.

The Story of Joe

Joe is self employed and works crazy hours. He has to. Joe is very good at what he does. All of Joe’s work comes from customer recommendation. Joe knows that to grow his business, he needs to take on additional help. But Joe is hunted by the thought of training someone up only for that person to run off with some of his customers. So he takes no action.

Three years on, Joe is still self employed. He has increased his hourly rate so his income and his taxes have increased. Joe hasn’t had a holiday in the last three years.

The Story of Helen

Helen is an ambitious individual who has toyed with the idea of doing something new and different for the last two years. She enjoys her work, but knows that there is much more to her life than what her job offers.

Helen carries a note book with her at all times. That’s where she writes all her thoughts and ideas.

Helen is aware of the need to reduce the numbers of hours she works in her present job to create time to work on her ideas. Yet the thought of a reduced pay cheque against the backdrop of increasing expenses holds her back from taking action on her ideas.

Helen is still gainfully employed in a job she loves. Once in a while she wishes she was doing something else.

The Story of Mary Kay

In 1963, Mary Kay Ash, resigned from her job out of frustration from being passed over for promotion. She came up with the idea of writing a book to help women in business. What emerged from the book idea was a business plan that was later implemented and turned into a multimillion dollar business. In 2001 at the time of Mary Kay Ash’s death, Mary Kay cosmetics had over 800,000 representatives in 37 countries with total annual sales of over $200 million.

Your Story
Think for a minute what would happen if you took action on your ideas? While you may not emerged as the next Bill Gates or Warren Buffett, you certainly will end up better off than you are today. You will have a wealth of experience that will make your chances of success in your next endevour greater than it is at the moment. You will learn valuable lessons along the way. You will know what works and what does not.

What’s your story? Have you got any ideas, dreams or projects which if you succeed in implementing in the next 12 months will make a big difference in your life? If yes, then consider taking action on your ideas.